His work has been published in Backpacker, Odyssey, MotorHome, Northwest Runner, CityDog, Northwest Outdoors, Northwest Magazine, Oregon Coast, and Northwest Travel magazines as well as the Getaways weekly outdoor recreation magazine insert for the Seattle Post-Intelligencer. Coverage of his work has also been written about in The Tacoma News Tribune, The Bellingham Herald, the Tri-Cities Herald, and the Yakima Herald. His photographs were featured throughout the NW Hiking section of the Northwest Cable News (NWCN) weekly television program and web site. His macro work was featured in India's leading imaging magazine "Smart Photography". Coverage of his work through their "Master Craftsmen" feature interview was complimented with his photo on the cover of the publication. Published work in various brochures and calendars include most recently calendars done by Smith-Western Co. (Tacoma, WA}.

Alan was awarded the contract to photograph dozens of historically significant pipe organs around the Puget Sound region for the Organ Historical Society for complete coverage of their National Convention in Seattle. Head to www.organsociety.org for more information regarding this highly recommended organization.

His work was published throughout the music CD layout design for Scott D. Davis' recordings "Tahoma" and "Winters Journey" and The Helsinki School of Music featured his photography throughout a music DVD production. Numerous images of spiders and their webs were also incorporated into the reader-boards and internal multimedia presentations for the "Masters of the Web" exhibit at the Woodland Park Zoo in Seattle, Washington. The Illinois State Board of Education has used his work for the coming years in the ISAT reading literacy test as will Research and Education Associates, Inc. in the development of 8th grade literacy language test guides used throughout the Northeastern states. 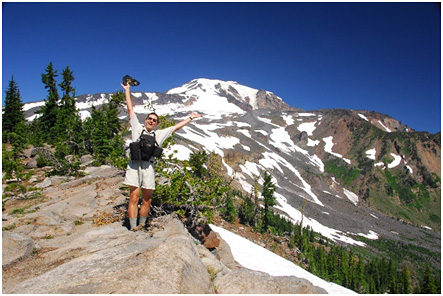 Alan celebrating completion of the last research for Day Hiking-South Cascades high on the SE shoulder of Mount Adams
Alan is perhaps best known in the region for his photography and co-author work with publisher The Mountaineers Books as part of the new "Day Hiking" guidebook series. Photography for his first four titles in the new book series include Day Hiking-Mount Rainier National Park, Day Hiking-South Cascades, Day Hiking-Central Cascades, and the best-selling Day Hiking-Snoqualmie Region. Prior to these he published award winning Best Desert Hikes: Washington with Dan A. Nelson, and also worked on Best Hikes With Dogs: Inland Northwest with Craig Romano. His work has been published on numerous other covers and internal pages of other titles by The Mountaineers Books and many other publishers including Globe Pequot Press, the literary journal Green Hills Literary Lantern published by Truman State University, as well as international publishers in Scandinavia. Alan has worked with book titles, educational display boards, and presentations published by biologists with the Washington Department of Fish and Wildlife. Waste Management, Columbia Basin Credit Union, University Volkswagen/Audi (Seattle), Seattle Children's Hospital, Bicycle Adventures, the City of Duvall (WA), and the Salton Sea National Wildlife Refuge represent some recent corporate sales of Alan's images.
www.alanbauer.com ~ Please enable JavaScript to view
Copyright © 2000-2022, Alan L. Bauer.  All Rights Reserved.
All images, text, and graphics are the copyrighted property of Alan L. Bauer and may not be reproduced, downloaded, altered, or used for any purpose without written permission.